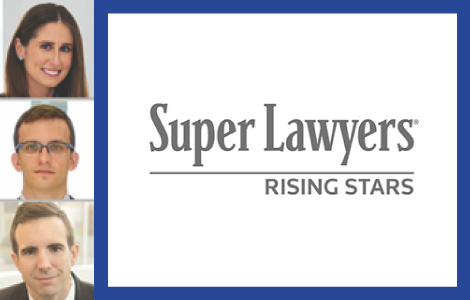 Mallory Biblo, Spencer Cox and Russell Herman are this year’s honorees, which are selected by Thomson Reuters’ legal division to recognize outstanding lawyers under the age of 40 and those who have been practicing law for no more than 10 years. The attorneys are selected based on nominations from other lawyers across the state and an extensive review by the publication’s editors.

Ms. Biblo is honored for the third consecutive year on the list. She represents businesses and individuals in all type of commercial litigation. She earned her law degree from the George Washington University Law School, and her undergraduate degree from Cornell University.

A veteran of the U. S. Navy, Mr. Cox represents individuals and businesses in complex litigation in both state and federal courts.  This is also his third consecutive year of recognition on the Rising Stars list.  He received his law degree from Harvard Law School and undergraduate degree from the University of Virginia.

Honored for the fifth consecutive year, Mr. Herman recently joined Burns Charest from another nationally recognized boutique firm. He represents both defendants and plaintiffs in a range of commercial disputes and has litigated several cases involving complex federal statutes. He earned his law degree from Harvard Law School and his undergraduate degree from Dartmouth College.