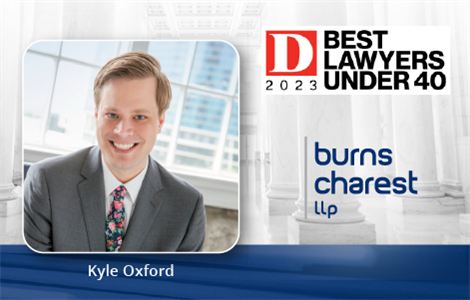 Congratulations to firm associate Kyle Oxford, recognized in the 2023 edition of D Magazine’s Best Lawyers Under 40, which highlights some of North Texas’ top young lawyers. The annual list, published in the January issue, is compiled based on peer nominations, followed by close review by an independent panel of distinguished attorneys working in conjunction with the magazine's editors.

Kyle is actively involved in several of the firm’s ongoing antitrust, class action and mass tort matters, and was a key member of the Burns Charest team that secured a landmark settlement on behalf of Facebook content moderators, resulting in a more than $50 million settlement that requires the company to implement reforms to protect content moderators in the future.

Kyle earned his law degree, with honors, from the Tulane University School of Law, where he was a Managing Editor of the Tulane Law Review. He received his undergraduate degree from Trinity University.